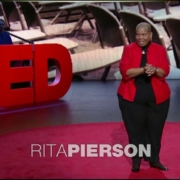 In a TED lecture Rita F. Pierson explains  that every child needs a role model. She herself comes from a family of teachers. In the first sentence she makes that very clear. And thereby establishes a personal connection to the topic. The introductory sentence contains the word “schoolhouse” three times. This is not only funny, it also establishes her as an expert. It gives her credibility. In particular, her humor allows to reach her listeners.

She also connects to the experiences of the listeners when she says key sentences such as:”Children don’t learn from people they don’t like”. Relationships are extremly important. Unfortunately, this is all too often forgotten in school. I suppose everyone in the audience agrees with her.

She underlines her assertion with two quotations. One of James Comer:”No significant learning can occur without a significant relationship” and one of George Washington-Carver:”All learning is understanding relationships”. A little later, she takes up the subject of relationships again and describes a moving personal example during her mother’s funeral.

In her speech she also uses direct speech. She talks about a student who has only solved 2 out of 20 tasks correctly. She’s replaying the scene. She imitates the voice of the student and exaggerates her facial expression. Despite or because of the poor performance of the pupil, she manages to make the audience laugh without making the pupil look badly. This is very funny and makes the audience receptive to her message.

It’s not that hard to use Pierson’s speech techniques in your own presentations. Here is a selection of three techniques she used in her speech.

Click here for the video of Rita Pierson. The video is about 8 minutes long. Very inspiring.