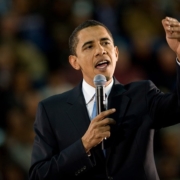 An analogy is a particularly powerful rhetorical device. It often allows to present an issue much more clearly than if one did it directly. It sometimes takes a little effort to find a good analogy. But those who take the time are at an advantage. Here’s an example.

“Imagine: You go to the doctor, no, better, you go to 100 doctors and 99 of them diagnose “diabetes”. So 99 doctors are telling you that you are diabetic and therefore you should stop eating bacon and donuts. Then what do you say? You say, “It’s a conspiracy! 99 doctors sat down with Obama and want to stop me from eating bacon and donuts!” [Pause] You would never say that! That’s exactly how it is with climate change …”

The words come from the ex-president of the United States, Barack Obama, who in his speech criticized the position of some Republicans on climate change and the Paris treaty. The analogy is convincing and delivered with humor. You have to see and listen to it in the original.

See the video here. (It takes less than 2 minutes).

As always, practice makes perfect. Only if you make the effort to implement the tips, will you have a chance to give a good speech.