Not optimal: the Shinkansen

Most of us have also experienced it: The person presenting speaks so fast that no one can follow him. I call it the Shinkansen. He rides so fast from A to B that he doesn’t take time to stop anywhere. Even at the few stations where it stops, it continues right away. After half an hour at top speed, I am completely exhausted. And so did the rest of the audience. Where might that come from?

Probably it comes from the fact that the speaker has not prepared well enough. He realizes after three quarters of the time that he has only shown the second of 10 slides. That’s when he thinks to himself, “Oh, I want to tell and show the rest, so I’ll just step on the gas more.” And with that, from now on, he talks twice as fast as before and looses everyone in the audience. Not good.

One of the most powerful secrets of rhetoric is the pause. It is completely underestimated. Wrong. The pause allows the audience to think about what the speaker has just said. It is particularly suitable at the moment when he said something important. In my rhetoric trainings I show this very impressively using the example of Martin Luther King and his speech “I have a dream“. Especially at the beginning he uses a lot of pauses.

Especially if you are one of those who speak very quickly, the pause is particularly suitable.

No fear of the break

Some are afraid of the break. That’s why they either don’t make them at all, or they fill them with a filler – usually an uh. 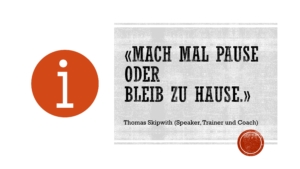 There are rhetoric writers who say a pause may be up to seven seconds long. For the speaker, this may seem like an eternity – but the audience doesn’t notice. Let it be half of seven seconds. Then it is not a problem in any case. On the contrary.

It gives the audience the opportunity to think along.

When you rehearse your next presentation, it’s wonderful to practice taking breaks. Count to 3 after each paragraph, preferably with your fingers. This way you’re sure to have a long enough break, too. In the live presentation, you will then probably pause for at least a second.

If you follow this tip, you will get more out of your presentations. I wish you much success in this.

P.S.: If you want feedback from a professional (again), sign up for one of my presentation skills trainings.